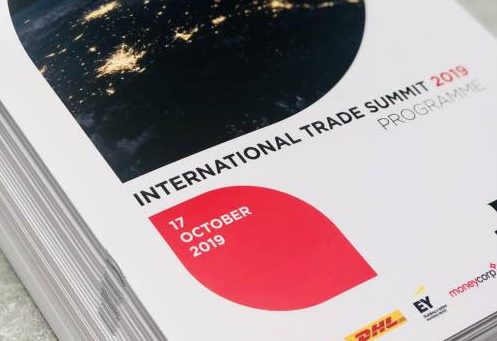 Welcome to London. And welcome to the British Chambers of Commerce 3rd annual International Trade Summit.

As Director General of the BCC, I am delighted to see hundreds of you here this morning.

You hail from Birmingham to Berlin. Manchester to Manila. And Thames Valley to Tel Aviv.

You work on local scale, national and indeed an international scale too.

And, you are all keen to understand more about trading in this time of unprecedented uncertainty.

Some businesses are succeeding and growing in markets worldwide. Others, on the other hand, are facing challenges.

I am often buoyed by stories of success that I hear from so many of our businesses. I am frustrated by the challenges that many face.

And nowhere are those challenges more prominent than around the UK’s imminent exit from the European Union.

Now, I know that most of you here today are interested in many things other than Brexit. Believe me were are too.

And at the risk of you feeling like you’re experiencing déjà vu… still, I must address it.

Everything and nothing has happened in UK politics since this country voted to leave the EU in June 2016.

And yet, still, no concrete outcome. Even though as we speak proposals are being debated in Brussels, Westminster and Belfast.

Everything and nothing has happened in business too.

Investment decisions have been put on hold. Expensive contingency plans have been activated. Competitiveness and confidence have been sapped. Money has been moved elsewhere around the world. Contracts and supply chains have been affected – and, so too, has cross-border trade.

And unfortunately as a result, growth in the UK economy has stalled.

I recognise that this is not entirely the result of Brexit – and I will come to that later – but, there is no denying that Brexit has played a starring role.

Ladies and gentlemen, businesses have been failed.

We have been failed by the fact that we are here today, in theory less than a fortnight before the biggest change in trade in a generation may take place, with little clearer idea as to where we are going than we were two and a half years ago.

One in two internationally active UK businesses are telling the BCC that uncertainty around Brexit is a barrier to growing their exports and trading more.

Tariffs and exchange rate volatility are considered a barrier for 35 and 33 per cent respectively – both things which relate to Brexit.

These are real world issues for businesses – right now.

And without action to avoid a messy and disorderly Brexit today in Brussels – and over the next fortnight – they will only get more acute.

Brexit is not an outcome. It is a process.

To the government, I say: There is no such thing as getting Brexit done. There is only, getting a deal done.

As someone said to me just yesterday, it would be the end of first sentence of the first paragraph of a first chapter of the first book that is still be written.

Some try to convince us that leaving the EU without a deal means certainty for businesses.

But, the truth is very different. It means, uncertainty will reign supreme.

Businesses are already experiencing the impact of three years of uncertainty, while the UK is still part of the EU.

Should we leave the EU without a deal, uncertainty will grow even further – and could sap business confidence for years to come.

It may be a long and winding road, but it is far better than going off a cliff.

Brexit, however, is not the only headwind that businesses are facing.

There is a growing, global trend of protectionism.

Trade disputes are on the rise.

The multilateral trading system is under some threat.

Businesses report that the cost of trading across borders is increasing.

It is against this backdrop that the WTO forecasts world trade growth of just 1.2 per cent this year, less than half the growth of three per cent recorded in 2018.

On the domestic front, for three years, the UK’s agenda has been hamstrung.

Our infrastructure is cracking at the seams, with four in ten businesses telling the BCC that the road and rail network does not meet their needs.

Digital infrastructure too. Last year, just half of our members said that they thought the UK mobile network was more reliable than it was five years ago.

Access to people remains a problem. Three quarters of businesses attempting to recruit tell the BCC that they have difficulty finding the right staff.

We need a clear and easy to use immigration system which allows businesses to fill local shortages efficiently and without high costs.

And, while they perennially encourage us to trade more, politicians simultaneously pile on new business costs, year after year.

At the same time, they compete with one another to demonstrate who can wag their finger most furiously at corporate Britain.

Our Chamber Network is witnessing the impact of these collective challenges first-hand.

In the BCC’s most recent Quarterly Economic Survey – the largest independent business survey in the UK – the balance of manufacturers reporting increased export orders was the lowest in a decade.

Our indicator for domestic sales is at its lowest since 2011.

And the balance of manufacturers reporting improved cash flow dropped to an eight-year low.

The services sector saw a decrease in the balance of businesses reporting increased export orders and domestic sales.

Their cash flow held steady, but low by historical standards.

Regardless of the Brexit outcome, the repair job required to make the UK the place in the world to invest and do business is substantial.

We need to bring back confidence.

We need to help businesses do more trade, not talk about how great we could do it.

And, to borrow a line from our friends in Westminster, great global trading nations need great foundations.

We in business need something to get behind.

Across the UK and around the world, businesses are hungry for real leadership and vision.

Those countries that have had the most investing and exporting success are those whose leadership has demonstrated that they are backing businesses to the hilt.

We want an optimistic vision for the future of the UK.

A national sense of purpose that unites the efforts of businesses, government and the public.

And, if we want businesses to take the leap and take on the risks involved, we also need the right conditions in place.

Economic performance depends intrinsically on business confidence – and that includes confidence in the stability and stance of governments.

Government must be consistent and committed in its approach so that businesses can feel confident to engage in the export and trade agenda.

Too many people seem to forget that it is businesses that trade, not governments.

In political and media circles, trade agreements are often touted as the be all and end all. But really, they are just the icing on the cake.

It is the trade deals between businesses which are the cake itself.

It is business that unlocks new markets, creates jobs and boosts receipts to the Exchequer.

It is business that builds links across borders and delivers prosperity not only across the UK, but also around the world.

And, it is businesses that will lead the way in helping the UK rise to new challenges, including the global decarbonisation agenda, seize new opportunities and shape what comes next.

For the government, maintaining a smooth trading relationship with our nearest and biggest trading partner – the EU – needs to be priority number one.

Priority number two needs to be maintaining smooth trading relationships with countries where the UK could lose existing access because it will no longer be a part of the EU.

Helping businesses keep the market access that they have today is more important than providing additional access for tomorrow.

We know that all of you in the room and the businesses with whom you work are not standing still.

The fact that you are here today is testament to that.

You have the interests of your employees, customers and communities at heart of all you do.

And you are inventive, nimble and commercial.

Our research consistently finds that internationally active businesses are more likely to grow and innovate than purely domestic businesses.

Whether you’re introducing new procedures, goods or services, you are finding new customers or finding new ways to increase sales.

You have a long and hard-earned reputation as being forthright and efficient, delivering high-quality goods and services.

And you have earned the trust of your partners too.

Countries want to do trade with UK businesses.

This is particularly critical in an ever more uncertain world.

Our businesses have every chance to make a success of the future that lies ahead.

So, let’s be optimistic, but let’s also be clear-headed.

Weaker growth in global trade, greater automation, the rise of protectionism and the inevitable friction that will arise with Brexit means that we have to work twice as hard to grow and secure our place at the heart of global trade.

Here in the UK, in Europe and right around the world, British Chambers stand ready to support businesses looking to navigate the opportunities and challenges ahead.

Trade is at the heart of what Chambers of Commerce do every day – locally, nationally and globally.

And we are over 100 British Chambers now – half in the UK and half in markets around the world.

Last year alone, we helped more than 670,000 UK export shipments, worth around £20 billion, reach customers in more than 190 markets.

We also grew our Global Business Network from 20 to 55 members, including 24 Chambers across the European conintent.

We are optimistic for the future of British business.

But optimism is not the same as complacency.

Like you, we have not and will not sit back.

We have ensured that the more than 350 trade specialists across the UK Chamber Network are ready to support businesses any changes to the movement of goods across borders.

We are working with politicians from all parties and top civil servants to find answers to the many pressing questions.

Our online Brexit Hub is helping businesses understand what Brexit means for them.

And we have brought businesses together – not least, today, at this International Trade Summit.

After all, no one understand business needs better than other businesses.

More than one third of internationally active UK businesses told the BCC that introductions to business partners and distributors overseas would encourage them to trade internationally – or trade more.

So today, you are among more than 500 delegates from new and established UK and international businesses.

And thank you to everyone involved in making today happen.