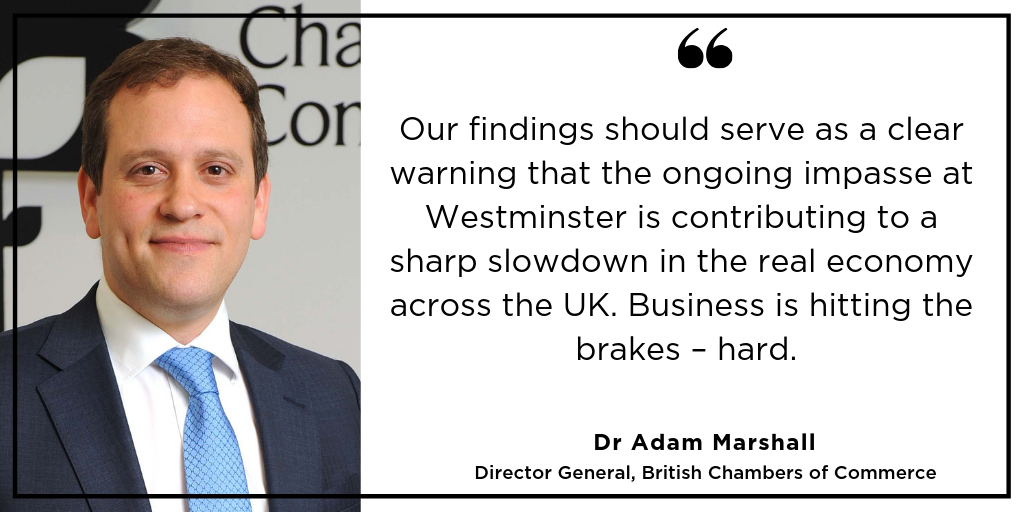 Against a backdrop of a slowing global economy, escalating Brexit uncertainty, and rises in business costs as the UK enters a new tax year, the latest results from the survey of over 7,000 businesses – employing around one million people – reflect a deterioration in many gauges of the UK’s economic strength.

Among manufacturers, the percentage of firms reporting an increase in domestic and export sales and orders dropped back to their 2016 levels.

The balance of firms reporting improved cashflow – a key indicator of business health – and which has been declining over recent years, has now gone into negative territory for the first time since 2012.

The lack of clarity over the UK’s future relationship with the EU is continuing to weigh on investment intentions in both the manufacturing and services sectors. The balance of firms who looked to invest in either plant and machinery or training dropped in both sectors to their lowest level in eight years. Business confidence in profitability and turnover also deteriorated sharply in the quarter.

The leading business group has been calling for an end to the relentless uncertainty, which as the latest results from the long-standing business survey highlight, has damaged the confidence and investment plans of business communities. Westminster must ensure that a messy and disorderly exit is avoided and provide firms with certainty on future conditions to prevent further declines. To kickstart strong growth in the economy, government must return its attention and energy to removing barriers to growth in the domestic environment.

Ill-timed increases in business costs – including compliance with Making Tax Digital, higher business rates for some firms, increased employer pension contribution requirements, and more – are also raising costs pressures for companies across the UK at a time when government should be looking to reduce rather than increase burdens.

“Our latest survey suggests that UK growth nearly ground to a halt in the first quarter of 2019, with increasing anxiety over Brexit and weakening global economic conditions driving a significant deterioration in almost all the key indicators in the quarter.

“The services sector suffered the more substantial loss of momentum in the first quarter with both domestic and international activity slowing sharply in the quarter. The manufacturing sector continues to struggle amid tougher global and domestic trading conditions and rising cost pressures. The marked decline in the export indicators in both sectors suggests that net trade is likely to have been a drag on UK GDP growth in Q1. The deterioration in cash flow is concerning as it can leave firms more vulnerable to external shocks, including disruptions to supply chains.

“The forward-looking indicators are disappointingly downbeat with weakening orders, confidence and investment intentions pointing to precious little growth over the coming quarters, unless substantial action is taken.”

“Our findings should serve as a clear warning that the ongoing impasse at Westminster is contributing to a sharp slowdown in the real economy across the UK. Business is hitting the brakes – hard.

“These are some of the weakest figures we’ve seen in nearly a decade, and that’s no coincidence. The prospect of a messy and disorderly exit from the EU is weighing heavily on the UK economy, and must still be avoided. The unwanted prospect of a disorderly ‘no deal’ exit, and the serious damage and dislocation it would bring, is still just days away unless Parliament acts to avoid it.

“At the same time that firms are having to enact costly contingency plans, the cost of doing business here in the UK continues to rise. This week sees a new tax year with a number of changes adding to the upfront cost of doing business in the UK, including the introduction of Making Tax Digital and changes to auto-enrolment, leaving many firms facing more bureaucracy and new expenses. It beggars belief that ministers are piling on more and more costly obligations at a time that businesses are already having to cope with Brexit and uncertainty.

“For too long Brexit tunnel-vision has distracted government from fixing the fundamentals to support growth here in the UK. We need to see an increased focus on creating the conditions for business success here at home – including concerted efforts to plug growing labour shortages, delivering an immigration policy that works for business and speeding up physical and digital infrastructure projects.”