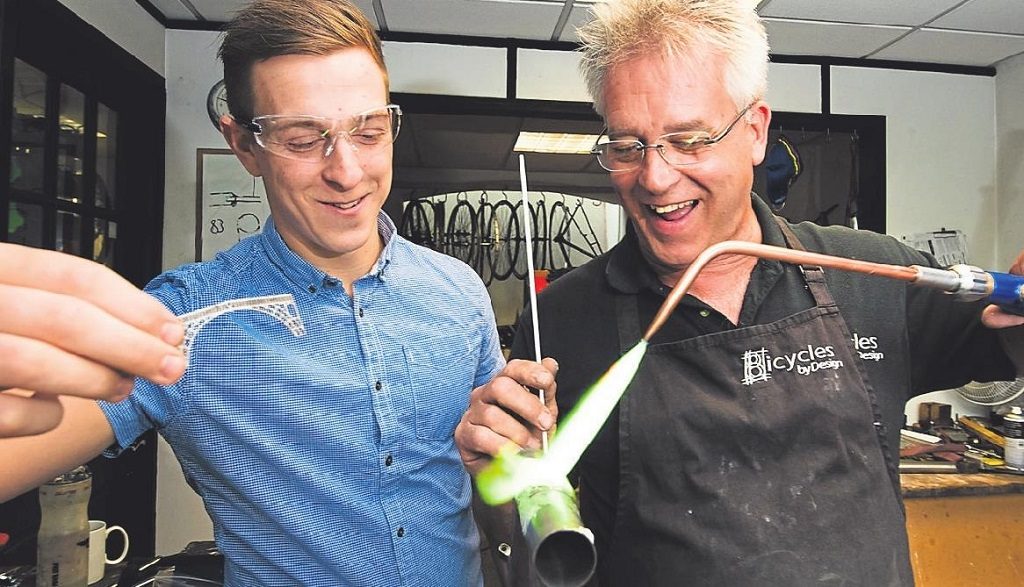 It is Shropshire’s most iconic landmark and recognised as world first but now the county’s Iron Bridge is setting the pace in the world of cycling after being immortalised in miniature form by Fabweld Steel Products (FSP).

FSP has produced a series of intricate copies of the famous structure as a brake bridge for hand built bespoke frames made by Bicycles by Design at its Coalport workshop.

The tiny versions of the original structure measure 77x29mm and are attached to the rear seat stays that lead to the wheels on the Ironbridge brand of bicycles.

FSP also produced a small scale version of the bicycle’s logo for the head badge – an image of the River Severn flowing under the Iron Bridge – that feature below the handlebars of the bikes.

Craftsmen Peter Bird and Robert Wade approached Telford based FSP for the special commission to harness its laser cutting design skills and technology.

Peter said “we are very proud of our industrial heritage, living and working in the World heritage site of the Ironbridge Gorge as we do, and we wanted to include a reference to that on our bikes.

“All the parts of the bike are made by artisans across Britain which we then assemble and fit the brake bridge and head badge to before it is painted. It’s great that we have been able to work with a Shropshire company as part of the process to create this iconic bike.”

FSP Managing Director Richard Hilton said: “This was a very different commission to our usual work but the cutting edge laser technology we have allows us to undertake these bespoke requests.

“We are based in Madeley, not far from the Iron Bridge, and it’s a pleasure to have contributed to this excellent piece of Shropshire manufacturing.”