Shropshire Chamber of Commerce’s patrons put their sharp-shooting skills to the test at a networking event with a difference. 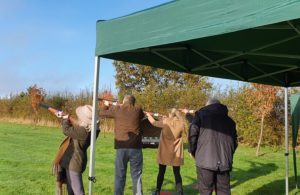 Hencote vineyard on the outskirts of Shrewsbury was the location for a morning of laser clay shooting, followed by lunch.

Each player was given the chance to use a modified shotgun which shot an infrared beam at real clays launched from a clay launcher.

When the trigger is pulled, the digital control scoreboard generates the 'bang' and when a player hits the target it reproduces the sound of a breaking clay.

Rachel Owen, Shropshire Chamber’s membership manager, said: “It was a fabulous morning of friendly, fun competition, as well as a wonderful opportunity for our patrons to enjoy a face-to-face catch-up.

“Our patrons were able to test their skills with what looks and feels like a real shotgun, but had been deactivated and turned into a high-tech version, firing invisible infrared beams.” 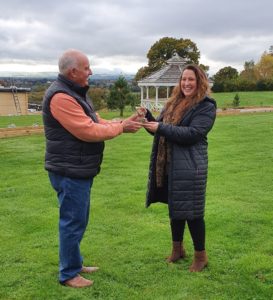 Rachel said the event had been a big success, and was likely to be repeated very soon, alongside other ‘have a go’ activities for patrons.

Shropshire Chamber of Commerce’s Patron Programme exists to give a select group of dynamic businesses in the county various opportunities to raise awareness of their organisations.

It is also a chance for them to formally express their commitment to the success of the Shropshire business community. For more details about the Chamber’s patron programme, see www.shropshire-chamber.co.uk/about-us/shropshire-chamber-patron-programme.